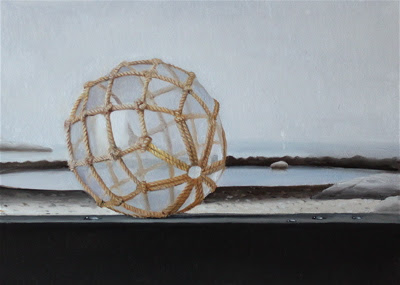 Glass Fishing Buoy
James Aponovich
oil on panel, 5" x 7", 2011
A CHANGE OF VENUE
Recently I was asked to be member of a major New York art gallery, Hirschl & Adler Modern. It is a big deal.
Hirschl and Adler Gallery is taking part in the annual NY Armory Show which opens on March 7. They have requested from me a new and large American based painting for this exhibition. Wow! New and large. I am up for it , but it will be challenging to find enough day light hours to complete this new piece and still post a new painting each week for the blog.
The gallery ( Hirschl & Adler Modern) is supportive of my efforts in completing this blog project and the planned June show of the 52 paintings at Clark Gallery. But it is important to me that I am getting work to them as well.
Do I give up the Aponovich 52 and concentrate on the new painting?
or
Do I finish this blog project risking not completing the large piece?
As usual, Beth had an idea for a sensible solution......paint the large piece and paint studies to post each week that document the process. So please bear with me as I combine both.
THE APPLEDORE PAINTING 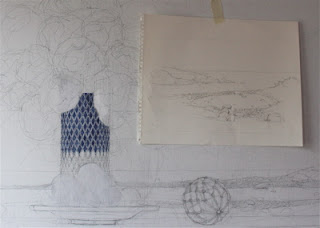 James Aponovich
Detail: Appledore Still Life
The new painting is set on Appledore Island, part of the Isles of Shoals off the coasts of New Hampshire and Maine. I cannot show a preliminary sketch because I do not have one...it is all in my head. At this point everything is fairly malleable, but here you can see that the fishing buoy is fully drawn. Above it, taped to the canvas, is a sketch of a tidal pool which will define part of the land/ seascape.
So,stay tuned......remember I told you it was going to be a bumpy ride!
copyright 2011 James Aponovich
Posted by APONOVICH & JOHANSSON at 2:27 PM 2 comments: 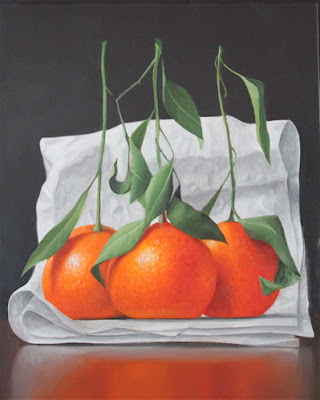 Three Mandarin Oranges
James Aponovich
oil on panel. 10" x 8", 2011
Right now it's Christmas Eve. I just finished the painting. Family is arriving through the door, dogs are barking and my services are required in the kitchen.
Happy Holidays
WELCOME YULE !
Posted by APONOVICH & JOHANSSON at 12:14 PM 1 comment:

WEEK 38/ A Bunch of Radishes 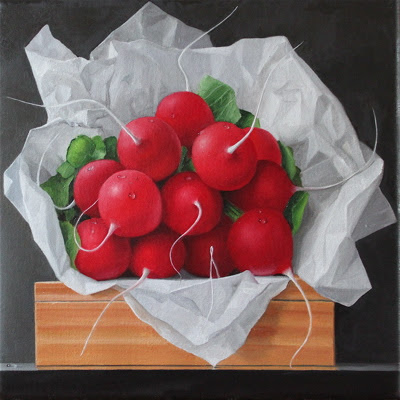 A Bunch of Radishes
James Aponovich
Oil on canvas, 9" x 9", 2011
GETTING EDGY AND TENSE
I have written about the power of the center ( week #7). In this painting of radishes I am interested in the tension that the sides of the composition exert on the subject matter. In other words, how to build tension. These radishes are more or less life size and if they were part of a larger grouping of objects they would appear small. By bring the sides of the canvas close to the tissue a certain tension is created and it gives the radishes a larger and more significant scale. 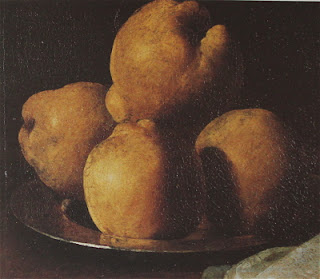 Francisco de Zurbaran (1598-1664)
Quinces
oil on canvas, 14" x 16"
Museo D'art, Barcelona
Here the tension is carried to an extreme as the edge of the canvas actually crops the top of the quince. The composition gives the fruit a monumentality which is almost suffocating. I wonder if it is a fragment of a larger painting. 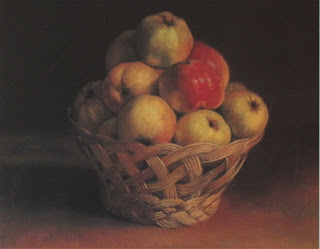 Jean-Etienne Liotard (1702-1789)
Basket of Apples
Pastel on vellum, 14" x 18"
Liotard has given his subject matter more breathing room. It results in a more serene and in my opinion a slightly more boring picture.
"I GOT RHYTHM"
Ira Gershwin

Next to my easel I have a piece of paper where I have written the eight Platonic Requirements for Art. They have become my daily mantra. The last one is rhythm. Visual rhythm is energy, movement and sequencing . I have tried to make the radishes and the surrounding tissue visually rotate. At the same time, although the format is square, there is an upward building of form which gives the appearance of a more vertical composition, kind of like a Dutch windmill.
Posted by APONOVICH & JOHANSSON at 9:50 AM No comments:

WEEK 37 / Daylilies in a Canton Bowl 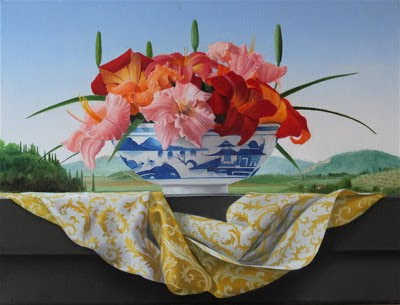 Daylilies in a Canton Bowl
James Aponovich
Oil on canvas, 13" x 17", 2011
This painting began as a presentation piece for a larger commissioned painting,. the central theme is a bowl full of flowers. I gave the patron three different flower possibilities: tulips, daylilies and peonies. She ended up choosing peonies ( the most difficult). Anyway, the study was lying around the studio so, as I am apt to do, I decided to paint an Italian landscape from my sketchbook.
ON THE ROAD TO ANGHIARI
The landscape is situated in Eastern Tuscany between Arezzo and Borgo San Sepolcro, near Anghiari. Anghiari is significant for two reasons: it is home to the Busatti fabric mill
(the cloth in the painting is Busatti) and it was the site of a famous Renaissance battle between the Florentines and the Milanese. Leonardo DaVinci painted The Battle of Anghiari and some scholars think the painting is located in the Palazzo Vecchio in Florence ( they won the battle).
It may be behind a fresco by by the mediocre painter / great biographer Giorgio Vasari. Next time you are in the Uffizi, he was the architect.
It is an interesting controversy so stay tuned.
THE PIERO TRAIL 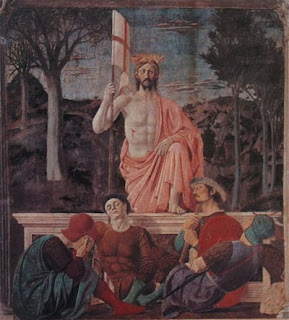 Piero Della Francesca
The Resurrection, 1463
Palazzo Comunale
Borgo San Sepolcro, Italy
Fresco
"The best picture in the world."
Aldous Huxley
Every summer thousands of tourists pursue what is called "The Piero della Francesca Trail".
In a single day they leave their rented villas in Chianti and drive successively to Arezzo, Monterchi, Borgo San Sepolcro, and if they still have stamina, Urbino. All the masterpieces in one day. Then they can say the have "done" the Piero Trail........please.
Beth and I did go to San Sepolcro to see this fresco. This was Piero's home town. We stayed in a charming hotel which had a pretty good restaurant and we experienced what the Italians call una passeggiata, an evening stroll. We never made it to Urbino, but I did find this fabric and as we always say," un' altra volta."
copyright 2011 James Aponovich
Posted by APONOVICH & JOHANSSON at 7:52 AM No comments:

Email ThisBlogThis!Share to TwitterShare to FacebookShare to Pinterest
Labels: Week 37 / Daylilies in a Canton Bowl 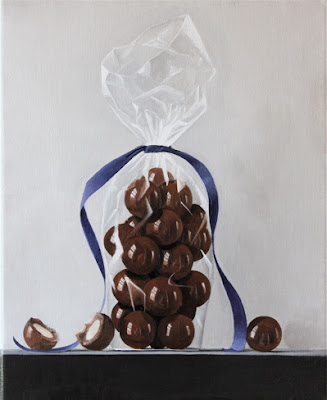 Malted Milk Balls
James Aponovich
oil on canvas, 11" x 9", 2011
ODE TO COMMON THINGS
Recently Beth and I were in a small antique shop in our neighboring town. It is a very sweet place with old linens, plates, silver and every sort of bric a brac . I was asked why I do not paint some of the objects that I was admiring there in the shop. I thought for a minute and replied;
"These things are too nice."
That is to say, they didn't need transformation. Although very tastefully attractive they would have not been very interesting on canvas. A poem by Pablo Neruda came to mind. It's a poem about a French fried potato:
FRENCH
FRIES
GO
INTO THE PAN
LIKE THE MORNING SWAN'S
SNOWY
FEATHERS
AND EMERGE
HALF-GOLDEN FROM THE OLIVE'S
CRACKLING AMBER...
ODE TO FRENCH FRIES
Pablo Neruda
French Fries! So,having cleaned the studio out for Thanksgiving dinner I found this bag of malted milk balls long forgotten on a shelf. Although old they still retained a glossy, rich surface. At the same time I was writing an appointment into the calendar and noticed a painting by Egon Shiele. 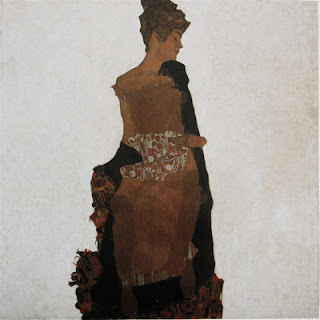 Egon Shiele
Portrait of Gerti Shiele, 1909
55" x 55", oil and stuff on canvas
The Museum of Modern Art, New York
Egon Shiele was an Austrian artist who briefly flourished during Vienna's Belle Epoque period. He died during the Great Influenza epidemic of 1919 at the age of 28.
You take your influences wherever you find them.
There is a saying that people who have died still live in the memories of those who loved them. Perhaps. Sometimes when I look at an old painting it seems so alive to me that I can almost touch the artist.
copyright 2011 James Aponovich
Posted by APONOVICH & JOHANSSON at 8:23 AM No comments: 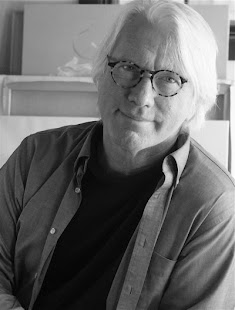